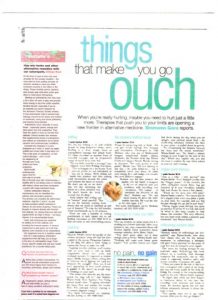 When you’re really hurting, maybe you need to hurt just a little more.
Therapies that push you to your limits are opening a new frontier in alternative medicine.
Bronwen Gora reports.

rolfing
* pain factor 8/10
No, this has nothing to do with wobble boards or tying kangaroos down, sport. Rolfing is a slow, steady form of manipulative massage that simply hurts. It’s often described as another form of remedial massage, but its proponents swear it’s much more than that.

“It’s not really even like a massage,” says Michael Arnel from Rolfing Associates. “The techniques are a lot slower. Your pressure points are not stimulated, as they are in shiatsu. We’re sliding our hands into position and then making small movements around the joints and between the layers of muscle. We don’t use oil, so we don’t slip. It’s like stretching the tissues in a slow, sensitive way. We don’t knock the body around, but it’s deep.”

Arnel admits that rolfing can be “intense” (read: painful). “But we see the intensity coming from tissues that are stuck or bunched up and out of balance.” To reap the full benefits, Arnel recommends up to 10 sessions.
There are only a handful of rolfing practitioners in each capital city, so call Rolfing Associates on (03) 9888 4119 to find out more or visit www.rolfing.com.au

cupping
* pain factor 6/10
Michelle Pfeiffer raised the profile of this ancient technique when she had her back cupped in the movie, Dangerous Liaisons. In the film, her doctors were trying to cleanse her blood to make her well.

Cupping involves putting small suction cups on your back to pull up fresh, oxygenated blood into tense and strangled muscles. It originated in ancient times, Middle Eastern scribes writing that it “removes blood, lightens the back and sharpens the eyesight”. And, yes, it can hurt, depending on how much pressure
is applied. It also leaves big purple rings of bruising on your back.

“The tenser your muscles are, the more purple the rings will be,” says Stephen Wayne-Smith from Sydney’s Zen Living natural health clinic. “Cupping stimulates the blood flow and releases the muscle fibre. The principle behind cupping is
to remove stagnant energy.”

the shubere method facial
* pain factor 7/10
Forget the pampering style of facial – this one gets results through firm pressure and stimulation. Developed by Valli Shubere, who runs one of Melbourne’s longest established health clinics, Herbario, the Shubere facial has Bloom Cosmetics’ creator Natalie Bloom among its devotees. “She even pushes in your gums,” Bloom says. “It’s not relaxing in any way – it’s quite torturous – but it completely calms you down. It calms your energy flow and makes you breathe into your different organs.”

Shubere says the firm pressure she applies with her hands is designed to rid you of muscular pain and problems with breathing and circulation. “It’s unique – it stimulates the function of the face,” Shubere says. “It’s not about beauty, it’s about the skin’s healthy function. We treat the skin as the vital organ it is.”

massages to make you taller
* pain factor 6/10
This one borders on urban myth, but it is working on a known principle: when your posture is bad, your connective fibres will shorten slightly. Deep connective tissue massage stretches these fibres. Ouch.

“You don’t grow taller, but it does change your posture,” Wayne-Smith says. “Nothing will make your bones grow longer.” And another reason you might feel short: during the day, when you are upright, your cerebral spinal fluid – the cushioning substance between the discs in your spine – is pulled down by gravity.

“It’s compressing the distance between the discs and the actual vertebrae,” Wayne-Smith says. “So, there’s a minute change in your height by the end of the day.” Which may explain why you feel the need to readjust the rear vision mirror in your car each evening.

“This is a killer – very painful,” says Wayne-Smith. Your therapist pushes into the “trigger points” of the muscles, the often contracted muscle fibres that get bunched up in your shoulders, temples, hips and elbows (to name a few places).

“These are the spots that refer pain,” Wayne-Smith explains. “You know you’ve hit a trigger point when you press a point on your neck, for example, and you feel the pain through the eye and in your head.”

During trigger point therapy, hot spots are pressed for about 10 seconds and you’ll be asked to take deep breaths to help release the muscles. “It’s very effective, but you must work within a person’s pain threshold,” says Wayne-Smith.

“Eastern forms of reflexology are very painful,” says Wayne-Smith, who does have clients who ask for the intense treatment. In reflexology, a therapist will place heavy pressure on the parts of your feet that are linked to your organs.
This starts the healing process in any lacklustre areas.

Reflexology has been refined to a soothing foot massage treatment for westerners, but in Asia, where it originated, bamboo sticks and serious amounts of pressure are used.

“There are points in the sole of the foot that correspond with a part of the body, and you can locate toxins in the body by feeling for crystals in the corresponding point on the sole,” Wayne-Smith explains.

“In Japan, they either use their fingers or bamboos sticks to rub into the crystalline toxic structure and break it down. It’s absolute agony, but you feel brilliant afterwards because it allows the body to heal.

“You quickly learn not to say ouch, because when you do they go deeper.”

do you need to push the pain barrier?
michelle pfeiffer, above left, did much for the image of cupping in the film Dangerous Liaisons, while cosmetics queen natalie bloom loves the Shubere facial.

1
* You love:
a) Someone lightly stroking your back.
b) A good, firm massage, but not too deep.
c) Massage that feels like it’s almost going to break your bones.

3
* Your back and muscles in general are:
a) Fine. I’m a fairly relaxed sort of person.
b) I sometimes have a few aches but nothing persistent.
c) Always knotting up – I lead a busy, stressful life.

4
* The most unusual therapy you have had, or would be willing to try, is most like:
a) A Swedish massage.
b) Acupuncture.
c) Crystal healing, past-life regression, rolfing – anything. I’m adventurous.

5
* You are the sort of person who:
a) Needs lots of laughing gas for dental procedures – basically, whatever painkiller is available you’ll take it.
b) Likes to take the pain away but is wary of taking too many chemicals.
c) Could give yourself stitches if you suffered a bad cut.

* mostly As
You can still benefit from some of these therapies by taking the easy option – for example, reflexology geared for westerners.
* mostly Bs
Firm remedial massage is probably a good place for you to start.
* mostly Cs
You may very well have been a gladiator in a past life.