Once a week in an inner city school room in Sydney, a small group of people sit in front of a slide projector that shines bright colours straight into their faces.
They’re busy scribbling notes or drawing patterns on sketchpads in reaction to each colour, their eyes closed or hands up to the light in order to “feel” the colour.

Unusual, yes. But class leader, Sydney-based natural medicine specialist Stephen Wayne-Smith, believes determining how people feel toward each of the seven colours of the spectrum, and then having them draw or paint with those particular colours, is one of the simplest ways of unlocking the mysteries of the soul.

“People jot down any feelings they get from each colour as well as images that pop into their head, then we discuss it. This way they can see what’s out of alignment in their bodies. For example, if you’ve broken up with someone, you’ll relate more to green (representing the heart chakra) and can even attract more green to you, so we’ll work on healing that.

“The idea is to get the person to work with the colour they need. It gets you in touch with yourself when you’re out of whack.”
Wayne-Smith’s methods are based on the ancient Indian belief of the chakra system, the energy centres of the body. Simply put, these run through the body from the base of the spine to the top of the head. Each chakra resonates an energy frequency, which is also a colour.
Wayne-Smith explains that how you think and feel about each colour indicates your emotional balance. For instance, the throat chakra resonates to the frequency of the colour blue, which in turn relates to communication. If blue makes you uncomfortable, you’re experiencing communication problems.
It doesn’t matter if all you ever draw are doodles, either. On the night body+soul attended an art chakra class, a few people were there solely for the therapy side, but there were also a couple of graphic artists and a fashion designer who say Wayne-Smith’s methods help them reconnect with their creativity.

“We’re here to explore our creative areas but also find out about our psyche and where we’re blocked in certain areas,” Wayne-Smith tells the class.
It’s not easy for some. As Wayne-Smith beams the colours onto the small group through a slide projector, some people have a bit of trouble coming up with any feelings at all for certain colours.

All is explained later. If, for instance, you can’t conjure up any feelings for green, it means there’s a blockage in your heart chakra and you may be having difficulties showing love or compassion. No feelings for purple? You may be lacking in spiritual awareness.
The “therapy” part comes when you paint and draw with the colours that make you feel uncomfortable. Wayne Smith says that by simply using them and looking at them, you’re actually helping heal those emotionally unbalanced parts of yourself.

After 15 minutes of musing over colours, we then lie flat on the floor, eyes closed, for a guided visualisation. Very curious.
We have to imagine walking down a long corridor lined by seven doors. Wayne-Smith then describes what is behind each door and asks us to “open” it, figure out how we feel and then make a mental note of which colour we see attached to that scenario.
Behind the first door, we have to imagine our darkest fear; behind the second, our ultimate sexual fantasy; and behind the third, a situation in which we have ultimate power.
Behind the fourth is someone we love, and behind the next we must speak to a great number of people. Behind the sixth is a book containing the full story of our lives. Lastly, behind the seventh door is pure peace and harmony.
After mentally attaching a colour to each experience, we head back to the table and the paints – and the rather interesting analyses.

“You’re generally unaware of what’s inside your mind until you do something like this,” Wayne-Smith tells us. “Blocked creativity is blocked energy. Once you unblock it, you have peace.”
As it turns out, each situation behind the seven doors relates to one of the seven chakras that control our emotional balance. For instance, people who had issues with fear imagined red behind the fifth door, the one where they had to talk to many people. If they’d been comfortable with the situation, they would instead have imagined blue, the colour of the throat chakra, which is connected to communication.
The class finishes up with everyone drawing with the colours they need to work with exploding through their designs. “You can learn how to heal yourself with colour,” says Wayne-Smith. 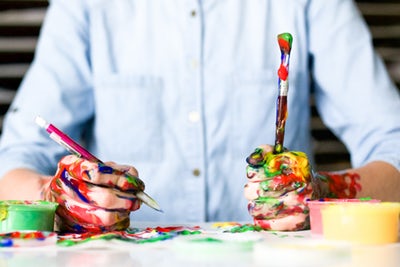