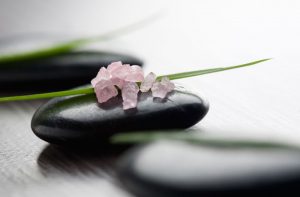 In the world of body therapy an age old tradition is taking hold at an incredible pace. It’s known by such names as Hot Rock therapy, Hot Stone therapy or Japanese hot rock. These terms are used mainly by various cultures that practise the therapy in some form or other. The roots of the treatments are in any place where the actual rock is to be found. The rock used is special and rocks are selected based on their makeup. They are igneous volcanic in nature, which means that they are formed from lava or volcanic eruptions. The rock cools to produce a smooth glassy surface rather than a sedimentary type of rock which is formed in layers and is rough in nature. This therapy just wouldn’t work if a therapist decided to use a nice piece of sandstone on you. Let’s save the dermabrasion for the experts.

The most common rock that is used is Basalt. These rocks are used mainly because of their smooth structure which feels amazing on the skin, but also because the rocks being volcanic in nature heat up readily and hold their heat longer than other types of rock.

It’s hard to imagine what it would be like to have someone massage you with a rock, but the feeling is one of deep penetrating heat that moves over the skin surface and slowly gets deeper into the muscle structure. The nature of the heat is extremely calming and is one of the benefits psychologically of this treatment. Patients who suffer anxiety and panic attacks are often advised to place a hot water bottle over their chest to alleviate the symptoms. There is something innately calming about heat being applied to the body at the correct temperature.

The hot stone is applied in sweeping movements over the surface of the muscle. This is done lightly at first, facilitating a softening of the muscle fascia or covering, to allow for a more efficient muscle manipulation. Once this fascia has softened then the therapist can apply more direct pressure with the stone to deeply penetrate constricted muscle fibres. The whole length of the muscle is worked in a long stroking sensation that allows for the muscle to fully relax. For stubborn and deeply constricted muscles, the hot rock therapy is amazingly effective in directing pressure directly into the trigger point to release the muscle. Working these trigger points allows for intense relaxation of the muscle and a deep shift of body structure and posture.

The movement of the heat and stone over the muscle area helps to increase blood flow and circulation. This is particularly helpful for people who have decreased circulation and cold extremities. The sweeping movements also drain excess fluid by stimulating the lymphatic system.

Placing rocks over certain areas and leaving them to penetrate deeply is also one of the benefits of this therapy.
A number of my clients who suffer from lower back pain around the time they are menstruating benefit enormously from a larger rock being placed over the sacrum area while other areas of the body are worked. A series of rocks can be placed along the spine area to deeply penetrate the soft tissue structures. The stimulation of these points which are also acupuncture points in the Eastern medicine tradition allows for a re-energising of the body as energy pathways or meridians are cleared.

It is this combination of physical and energetic that has led to the popularity of this therapy. It is why it has such a huge history in countries such as Japan, Hawaii and other areas of Polynesia as these cultures are deeply spiritual in their makeup as well as being geographically volcanic in nature. Anywhere where the spiritual is connected to the physical you will find this work. Even in North America the native American Indians practised the
method combining medicinal herbs in the oils they used in the massage.
In my practice I find clients particularly enjoy the Polynesian essences of frangipanni, Tahitian gardenia and jasmine in the massage treatment.

For people who enjoy a particularly deep massage, hot rock is also of benefit. Most of the stones that are used in this therapy are of the flat and smooth type, but there are other rock shapes that can be used to get greater pressure and depth. These can be worked into areas around the scapula and pressure points on the feet. Similar work is done with carved horn and bone in Asia and is effective in releasing stubborn areas of tension. Hot rock has the benefit of applying heat at the same time which maximises the release potential and greatly decreases the pain factor involved in this type of work. Those who have had deep trigger point therapy can certainly relate to the pain that is experienced during the work but is endured because of the amazing results it produces in improving range of motion and pain reduction.

Hot Rock treatments have taken off in a big way in many places in the United States with most resorts and spas now offering the service. It is particularly popular in ski resorts and colder areas as the heat offers an attractive incentive to disrobe and have a massage even when the colder weather makes you feel like curling up in front of a fire.

As always it pays to make sure your therapist is qualified and experienced before trusting yourself to someone with a hot rock in their hand. Like most body therapies some people have a greater sense of touch than others. This combined with a constructive grounding in anatomy will ensure you walk away feeling like you have been ‘stoned’ in the right way and not in the proverbial biblical sense.

Stephen Wayne-Smith is a qualified health and massage therapist.
Details are from Zenliving Natural Health 0417 681 311 or www.zenlivingnaturalhealth.com